The debate over receiving treatment at a hospital emergency room versus treatment from an urgent care center is worth having for anyone concerned about medical debt, especially families, who may have a lot of “emergency” and “urgent” needs facing them every year.

There are many sides to the debate, but the generally agreed upon guidelines for deciding between an emergency room and urgent care center are:

According to the Centers for Disease Control and Prevention (CDC), Americans made 136.1 million visits to one of the country’s nearly 5,000 emergency rooms in 2012. Approximately 20 million of them arrived by ambulance. About 43% of all hospital admissions originate in an emergency room.

Normally, emergency room patients receive one of five levels of care. Level 1 is for minor problems, such as an earache. Level 2 may be for a cut that requires stitches, while level 5 is for more severe problems, like a broken bone. Levels of care exist for critically ill patients that are even higher.

The main reason that so many emergency room visits are for non-urgent care is that hospital ERs are required by federal law to provide care to all patients, regardless of their ability to pay. Since they can’t be turned away, patients without insurance, or the necessary funds to pay out-of-pocket costs, often utilize emergency rooms as their main health care provider. This puts tremendous strain on ERs, and limits their ability to attend quickly to health emergencies.
It is estimated that more than $18 billion could be saved annually if those patients whose medical problems are considered “avoidable” or “non-urgent” were to take advantage of primary or preventive health care and not rely on ERs for their medical needs.

What Are Urgent Care Centers?

Urgent care centers are a valid bridge between your primary care physician and emergency room services. They evolved in the 1990s to serve the 73% of Americans who say they have no access to their primary care doctors at night or on weekends.

There is no appointment necessary at the estimated 9,300 urgent care centers in the U.S. They usually are open seven days a week until 9 p.m. or later. The centers are staffed primarily by family care and emergency room physicians and can duplicate nearly all the services offered in the traditional doctor’s office or emergency room with two major exceptions:

Urgent care centers do have x-ray machines, lab testing and most of the equipment needed for treating medical conditions ranging from simple things like flu shots or blood-sugar tests to more sophisticated treatment like casting broken bones. Nearly all their procedures are covered by insurance and the average cost is about $150 per patient.

Walk-in clinics are similar to urgent care centers, only they are typically are staffed by nurse practitioners instead of doctors. That limits the services they can offer, but generally speaking, if you need a shot, treatment for a cold, flu or slight sprain, you could get it at a walk-in clinic. The walk-in clinics are located in pharmacies, grocery stores and retail outlets.

The most recent data available on costs, time, resources and effectiveness of emergency rooms is more than three years old. Still the numbers from 2012 are just as frightening in 2015.

The Center for Disease Control and Prevention (CDC) said there were more than 136 million visits to emergency rooms in 2012. While the American College of Emergency Physicians reports that 92% of emergency visits are from “very sick people who need care within 1 minute to 2 hours,” the National Hospital Ambulatory Medical Care Survey estimates that one-third to one-half of all ER visits are for non-urgent care.

The New England Health Institute said 56% of emergency room visits were “totally avoidable.” It didn’t say how much of the remaining 44% could have been treated at urgent care centers, but several studies suggest many of these cases could have been handled in urgent care. In fact, the top three reasons for ER visits in 2012 were sprains and strains (6.1 million visits), upper respiratory infections (5.9 million) and superficial cuts (5.8 million).

Thus, the decision to receive treatment at an emergency room is one of the many reasons Americans spent $3 trillion on healthcare in 2014. It’s also a factor for why more than 75 million people complained they were having problems paying off medical debt, which happens to be the No. 1 cause of bankruptcy in the US. Some of the debt problems could be avoided if people knew more about emergency rooms, urgent care centers and walk-in clinics and how they serve those in need of medical attention.

When To Choose Emergency Room

The real question that should be answered when deciding between urgent care centers and emergency rooms is: Why am I going?

If the answer is: “Because I have life-threatening injuries or symptoms,” then the choice is simple: Go to an emergency room. Otherwise, an urgent care center should do.

The problem is that some ailments and symptoms straddle the line and only a trained medical staffer could make the call. If it’s too close to call, common sense dictates going to an emergency room.
There is no definitive list of ailments that demand to be treated at emergency rooms. Generally speaking, if the condition can permanently impair or endanger your life, it is an emergency.

When to choose an Urgent Center Care

Again, if the situation is life threatening or the patient is showing symptoms for life-threatening condition such as difficulty breathing, unconscious or unresponsive, call 9-1-1 and let an ambulance take them to the emergency room. They could receive medical care while riding in the ambulance that could mean the difference between life and death.

The cost difference alone should be enough to encourage people to go to urgent care centers. The average urgent care visits range from $50 to $150, depending on the patient’s co-pay and level of treatment, according to Dr. Franz Ritucci, President of the American Academy of Urgent Care Medicine.

Dr. Ritucci said that 70% of patients at urgent care centers use health insurance and their only cost is a co-pay. Uninsured patients face additional charges for things like x-rays, shots, lab tests or casting a broken bone. As a result, the costs for their care can be much higher. Average emergency room costs vary wildly based on treatment, but a 2013 National Institute of Health study put the median cost at $1,233. Other estimates push it to as high as $2,168.

Then there is the time factor. Patients at urgent center care are seen on a first-come, first-serve basis and average less than 30 minutes from the time they arrive until they depart.
Emergency rooms treat patients based on the severity of condition. Patients with life-threatening injuries go first. The average time from arrival to departure is 2 hours, 15 minutes.

The following estimated costs were prepared by Medica Choice Network for nine of the most common reasons people visit the ER. They were determined by calculating the average number on claims submitted in 2010 to the Medica Choice Network, a system of more than 4,000 medical offices, clinics and hospitals across four Midwestern states.

Restore Health is a quick, convenient, affordable alternative to a hospital emergency room for non-life-threatening illnesses and ailments. On-site services including digital x-ray, labs, and diagnostic testing are available.

Additional Services You May Need 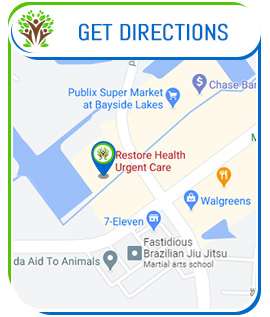 *For any medical procedure, patients respond to treatment differently, hence each patient’s results may vary.
**In case of a life threatening emergency, immediately call 911.
***Information on this site is not intended or implied to be a substitute for professional medical advice, diagnosis or treatment. All content contained on or available through this site is for general information purposes only.
****By using this website and sending us your information, you are giving us permission to contact you by electronic and non-electronic means. We also track the conversions and collect user data to improve marketing.
*****If you are vision-impaired or have some other impairment covered by the Americans with Disabilities Act or a similar law, and you wish to discuss potential accommodations related to using this website, please contact us.

We Restore What You Value Most

How May I Help You?